The SimpleRisk 20210930-001 release includes a number of new features, bug fixes and security updates.  Three key areas we focused on were:

We’ve also made improvements to the Governance component of SimpleRisk, as you are now able to set a Control Type to be associated with a control and track fail states directly in the control details. The default Control Types are:

When an Enterprise control is audited and fails an audit test, the system will automatically set a Control Status to “Fail” and submit any new associated risk(s) based on the audit test failure. This not only allows you to more effectively track failures that you identify outside the scope of a given audit test it also ensures you have the ability to continually track any additional risks identified due to a control audit failure. 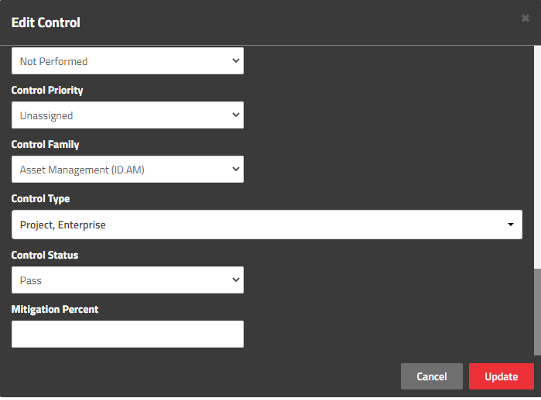 To begin using this new feature, you will first need to select “Enterprise” as the Control Type. Please note that by default, “Standalone” will be the only Control Type associated with controls, so you will need to select the “Enterprise Type” for the automated tracking of the control fail state to work properly. Once “Enterprise” is selected and saved, you will be ready to realize the benefits this new functionality brings to compliance auditing.

Now when a Compliance Audit Test for that control takes place, the control status can be updated based on the result. At the same time, if that audit test fails, the user will have the ability to submit a risk that will be directly associated with that control. That way, if the test is run again and that risk is still open and being tracked, it will automatically remain associated with the test and displayed in the “Risks” section at the bottom.

We also introduced a brand new Vulnerability Management Extra with this release.  This Extra takes the functionality once rolled into the Import/Export Extra and completely reworks the way we approach vulnerability management. Where before we would pull any and all vulnerabilities from a given instance of your application of choice we now offer the ability to filter this down by site and risk level and provide the opportunity to triage the entries added before generating risks. This extra is offered free of charge to all users who already possess a license to import/export and should already be available for download.

Other new features that were added to enhance the usability of SimpleRisk include:

This release also included the following bug fixes for the SimpleRisk Core:

We also fixed a number of potential Cross-Site Scripting vulnerabilities as well as an issue allowing for circumvention of permissions regarding the ability to view all Asset Valuations.